Create an alert for Marketing Letters now and receive an email for each new issue with an overview and direct links to all articles.

Increasingly, national brands have cast people from marginalized groups in advertising. It is important to understand the elements that influence consumers’ responses to advertisements featuring groups who have been traditionally excluded from advertising campaigns. Although consumers may wish to buy brands that support their own views on human rights and equality, we propose that consumers in the target market may be uncomfortable if the group portrayal contradicts their beliefs about the topic, concept, or social groups in the ad. Across two studies, we show that when an ad creates this type of internal contradiction within consumers, it may elicit a more negative response than an ad portraying a more traditional model. However, we also find preliminary evidence that using models from marginalized groups can be more effective than using more traditional models—as long as such portrayals do not violate certain target consumers’ schemas. The implications of these results will be discussed. 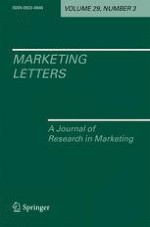 The differentiated effect of advertising on readership: evidence from a two-sided market approach

Besting the status quo: the effect of abstract versus concrete mindsets on emotional trade-off difficulty and avoidant coping behavior

The self-creation effect: making a product supports its mindful consumption and the consumer’s well-being

Warmer or cooler: the influence of ambient temperature on complex choices