Create an alert for MTZ worldwide now and receive an email for each new issue with an overview and direct links to all articles.

PATENTSEARCH
Activate to find patents in this article.
powered by
Search for Patents
download
DOWNLOAD
share
SHARE
print
PRINT
insite
SEARCH
Operating supplies such as oils and greases have not yet fallen under the lens of defossilization measures. Yet these products, which are currently manufactured from fossil crude oil, are also required in vehicles that purport to be emissions-neutral. Bernhard Hagemann, Head of Innovation Management and New Markets at Fuchs Schmierstoffe, explains the challenges and opportunities associated with friction optimization and defossilization.
×
MTZ _ Is defossilization of lubricants possible as it is with fuels? 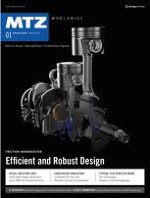 Use of Particle Simulations in the Development Process for Vehicle Gearboxes