This study adopts moral reasoning strategies (moral rationalization and decoupling) to investigate why consumers support companies involved in ethical transgressions. Drawing on several cases of real multinationals publicly involved in tax avoidance practices, it aims to demonstrate that moral rationalization and moral decoupling depend not only on how consumers perceive the magnitude of the transgression, but also on their individual differences, such as political ideology and brand identification. A quantitative study with a sample of 3989 consumers of five different focal brands was employed to test a set of hypotheses. Findings reveal that moral decoupling directly (and indirectly through performance judgments) explains purchase intentions. However, rationalization only explains behavioral intentions if it leads to a reduction in the perceived immorality of the action. Furthermore, the study reveals significant differences across personal values. Left-leaning individuals tend to rationalize less and decouple more when they perceive that the magnitude of the transgression as egregious. Interestingly, consumers who are highly identified with the brand are less affected by the transgression and tend to be more supportive toward the brand by engaging in rationalization mechanisms.
Advertisement
previous article Examining the Boundaries of Ethical Leadership: The Harmful Effect of Co-worker Social Undermining on Disengagement and Employee Attitudes
next article Effects of Advice on Auditor Whistleblowing Propensity: Do Advice Source and Advisor Reassurance Matter? 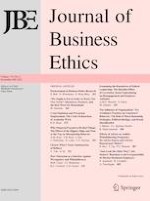 “Just Look the Other Way”: Job Seekers’ Reactions to the Irresponsibility of Market-Dominant Employers

The Role of Authentic (vs. Hubristic) Pride in Leveraging the Effectiveness of Cost Transparency