The influence of wood density on longitudinal wave velocity determined by the ultrasound method in comparison to the resonance longitudinal method | springerprofessional.de Skip to main content
TOOLBAR 1 2 3 4
SEARCH MENU 1 2 3 4

The paper deals with the relationship between density and the velocity of sound wave propagation in wood. The wave velocity was measured using the heartwood of doussie (Afzelia bipindensis), merbau (Intsia bijuga), panga panga (Miletia stuhlmannii Taub.), tigerwood (Astronium graveolens Jacq.) and zebrano (Microberlinia brazzavillensis) by the two methods: ultrasound and resonance longitudinal. The velocity measured by the ultrasound method was always higher than the values gained by the resonance longitudinal method. However, there is a high correlation between the results of both methods. A change in sound wave velocity due to a change in density was not confirmed for any of the species. A similar conclusion was reached in the comparison among species. 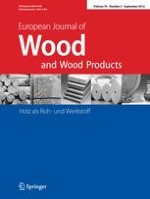 Dielectric analysis as curing control for aminoplast resins—correlation with DMA