Water-level fluctuation evaluation and forecasting for a river is increasingly important because of its close ties to human living and production. In this study, with annual periodic extension for monthly average water-level fluctuation, Fourier analysis employing finite Fourier series is presented for evaluating its fluctuation. Fourier analysis in the conventional form which is the most common analysis method in the frequency domain, however, cannot be straightly applied for forecasting. Then, the extended version of the Fourier-series model in the least-square sense is proposed for forecasting. The extended forecasting model obtains its optimum Fourier coefficients in the least-squares based on previous monthly water-level observations. Experiments at the different monitoring stations of the Yangtze River in China indicate potentiality of the proposed method. It is shown that the fluctuation of monthly average water-level is well described by about six-term harmonics. And the extended Fourier forecasting model predicts the fluctuation of monthly water level most fitting about three-term harmonics. 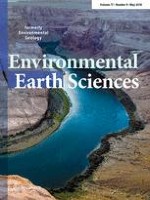 Assessment of the acid drainage neutralization capacity and the toxic metals lixiviation of tailing from Guanajuato mining district, Mexico

Salt deposition and soiling of stone facades by traffic-induced immissions

Improvement of the finite-element-based limit equilibrium method to include changes in groundwater: a case study of a deforming bank slope from the Three Gorges Reservoir