We tested whether the impact of an organizational transgression on consumer sentiment differs depending on whether the organization is a nonprofit. Competing hypotheses were tested: (1) that people expect higher ethical standards from a nonprofit than a commercial organization, and so having this expectation violated generates a harsher response (the moral disillusionment hypothesis) and (2) that a nonprofit’s reputation as a moral entity buffers it against the negative consequences of transgressions (the moral insurance hypothesis). In three experiments (collective N = 1372) participants were told that an organization had engaged in fraud (Study 1), exploitation of women (Study 2), or unethical labor practices (Study 3). Consistent with the moral disillusionment hypothesis, decreases in consumer trust post-transgression were greater when the organization was described as nonprofit (compared to a commercial entity), an effect that was mediated by expectancy violations. This drop in trust then flowed through to consumer intentions (Study 1) and consumer word of mouth intentions (Studies 2 and 3). No support was found for the moral insurance hypothesis. Results confirm that nonprofits are penalized more harshly than commercial organizations when they breach consumer trust. 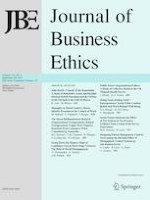 Do National Differences in Social Capital and Corporate Ethical Behaviour Perceptions Influence the Use of Collateral? Cross-Country Evidence

Managers as Moral Leaders: Moral Identity Processes in the Context of Work

Going Down the Slippery Slope of Legitimacy Lies in Early-Stage Ventures: The Role of Moral Disengagement