Non-constituent donors constitute an increasingly important fundraising base for members of the U.S. House. These donors are theorized to be seeking “surrogate representation” by buying additional representation rather than relying solely upon representation provided by their own House members. However, precisely why they contribute in this way remains unclear. Using data from the Cooperative Congressional Election Studies (CCES) 2008–2014 in a series of logistic models, I investigate whether self-reported donors make contributions to House races outside of their home states for policy or partisan reasons. I uncover evidence that surrogate seekers make their out-of-state contributions to recover partisan representation and to gain additional partisan and policy representation. Further, conservative issue stances significantly increase the likelihood of out-of-state giving more so than liberal stances suggesting conservative donors have less difficulty identifying surrogate representatives. Taken together, the results suggest surrogate seekers are strategic and politically sophisticated with respect to their giving choices and motivations. 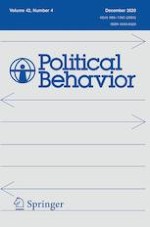 Do Means of Program Delivery and Distributional Consequences Affect Policy Support? Experimental Evidence About the Sources of Citizens’ Policy Opinions

Religion, Sectarianism, and Democracy: Theory and Evidence from Lebanon

The Resistance as Role Model: Disillusionment and Protest Among American Adolescents After 2016