The politics of policy adoption: a saga on the difficulties of enacting policy diffusion or transfer across industrialized countries | springerprofessional.de Skip to main content
TOOLBAR 1 2 3 4
SEARCH MENU 1 2 3 4

While studies of policy diffusion and policy transfer have focused largely on industrialized countries, it is the exact opposite when it comes to pension policies where the focus remains on national elements such as institutions and partisanship. Focusing on a case with a high degree of programmatic similarities, this contribution fills this gap by analyzing the adoptive process in an industrialized country. The empirical analysis involves the transfer and diffusion of the Swedish pension reform in Norway. Norway has a long history of borrowing from Sweden. Following a highly publicized Swedish pension reform embraced by the World Bank, Norwegian policy makers could have easily introduced this reform at home when they embarked into a reform process in the early 2000s. By analyzing core policy instruments of the Swedish pension reform and the agenda-setting and the formulation stages in the policy process in the Norwegian case, this contribution explains why it proves complex and difficult to attribute the outcome of a reform to a diffuser and it argues that more attention is needed on the process behind the adoption of policies from abroad.

Title
The politics of policy adoption: a saga on the difficulties of enacting policy diffusion or transfer across industrialized countries
Author:
Patrik Marier 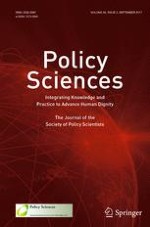 The epistemic benefits of deliberative democracy

How policies become contested: a spiral of imagination and evidence in a large infrastructure project

Resilience and robustness in policy design: a critical appraisal