Engineered wood products (EWPs) are a group of materials having a very similar chemical composition but having different and non-uniform thermo-physical properties throughout their thickness. Such materials present a significant challenge from the pyrolysis modelling point of view. The main focus of the paper is to study and compare the differences between six EWPs—oriented strand board (OSB), plywood, particle board (PB), low-density (LDF), medium-density (MDF) and high-density (HDF) fibreboard—in terms of their pyrolysis and burning behaviour. Vertical density profiles (VDPs), thermal degradation behaviour, and burning behaviour were studied and compared. There is a considerable need for a consistent and systematic approach in estimating pyrolysis model complexity and model input parameters. A systematic method to determine the minimum level of the EWPs decomposition model complexity to reproduce the thermal degradation behaviour as measured using thermogravimetric analysis and using the set of parallel reactions was applied. EWPs were found to have similar thermal decomposition onset and range. Maximal decomposition rates were within 25%. OSB, PB, LDF and HDF decomposition can be modelled using three-step parallel reactions scheme, MDF using four parallel reactions. A set of parallel reactions cannot describe the thermal degradation behaviour of plywood. Cone calorimeter tests at heat flux levels of 20 kW/m2, 50 kW/m2 and \(80\, \hbox {kW}/\hbox {m}^{2}\) revealed that influence of the different thermo-physical properties on time to ignition and time to peak heat release rate (HRR) is not significant except LDF and HDF due to their very different density. Peak HRR varies between EWPs, which is attributed primarily to charring and different thermo-physical properties of the EWPs char. EWPs gas phase combustion parameters for the fire models were derived. 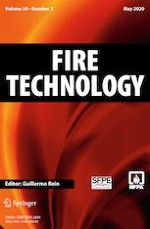 Correction to: Analysis of One and Two-Story Single Family Home Fire Dynamics and the Impact of Firefighter Horizontal Ventilation

Correction to: Analysis of Changing Residential Fire Dynamics and Its Implications on Firefighter Operational Timeframes