We present a series of three-dimensional visualizations of numerically simulated turbulent wakes in a stably stratified fluid with a focus on the effects of the wake Reynolds number, Re, on the wake flow. The visualization of stratified wakes is complicated by the coexistence of regions of distinct dynamics in the flow, including large-scale ‘pancake vortices,’ small-scale shear instabilities within layers of concentrated vertical shear, and internal waves emitted by the wake flow to the ambient fluid. We apply various techniques to identify dynamically distinct regions within the wake flow and visualize them separately. The volume fractions occupied by each of these regions are also quantified. Through the visualizations, we observe three significant effects on the wake’s evolution associated with increasing wake Reynolds number: (1) nontrivial modifications to the structure of the pancake vortices, (2) prolongation of the period of internal wave emission from the wake, and (3) greater longevity of small-scale shear instabilities within the anisotropic flow structures. These observations reveal a trend in Re that can potentially be extrapolated to stratified wakes at even larger Reynolds numbers that are typical of geophysical wakes and currently not accessible to laboratory experiments or numerical simulations. 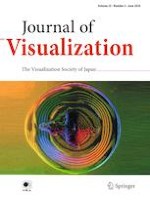