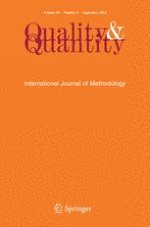 Homophily and heterophily in personal networks. From mutual acquaintance to relationship intensity

The influence of greenwash on green word-of-mouth (green WOM): the mediation effects of green perceived quality and green satisfaction

How are newspaper companies using social media to engage and connect with their audiences? characteristics and forms of Korean newspapers’ YouTube use