In her recent book A Political Education, Elizabeth Todd-Breland tells the story of black education reform in Chicago since the modern civil rights movement. In doing so, she demonstrates how black educators and communities have ceaselessly fought against white supremacist structures that perpetuate racial and class disparities, and shows how their victories, though important, were often undermined by these same structures. More importantly, Todd-Breland uncovers the forgotten stories and contributions of black women educators and activists at the heart of these movements that were heretofore disregarded in favor of those of their male counterparts. Writing against patriarchal norms that historically sidestep women’s contributions, Todd-Breland organizes her historical analysis around the stories of these women. 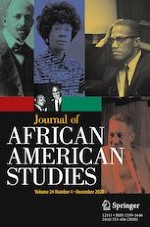 The Prevalence, Correlates, and Consequences of Racial Apathy Among Black Teenagers

The Black Woman’s Math Problem: Exploring the Resilience of Black Women Who Lead in the United States Federal Government

Exploring the Impact of Involvement on Black Collegians’ Degree Aspirations

“What’s Happened to the People?” Gentrification and Racial Segregation in Brooklyn