Trends in Economic Homogamy: Changes in Assortative Mating or the Division of Labor in Marriage? | springerprofessional.de Skip to main content
SEARCH MENU 1 2 3 4

Create an alert for Demography now and receive an email for each new issue with an overview and direct links to all articles.

The growing economic resemblance of spouses has contributed to rising inequality by increasing the number of couples in which there are two high- or two low-earning partners. The dominant explanation for this trend is increased assortative mating. Previous research has primarily relied on cross-sectional data and thus has been unable to disentangle changes in assortative mating from changes in the division of spouses’ paid labor—a potentially key mechanism given the dramatic rise in wives’ labor supply. We use data from the Panel Study of Income Dynamics (PSID) to decompose the increase in the correlation between spouses’ earnings and its contribution to inequality between 1970 and 2013 into parts due to (a) changes in assortative mating, and (b) changes in the division of paid labor. Contrary to what has often been assumed, the rise of economic homogamy and its contribution to inequality is largely attributable to changes in the division of paid labor rather than changes in sorting on earnings or earnings potential. Our findings indicate that the rise of economic homogamy cannot be explained by hypotheses centered on meeting and matching opportunities, and they show where in this process inequality is generated and where it is not.
Advertisement 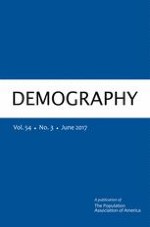 The Sibsize Revolution and Social Disparities in Children’s Family Contexts in the United States, 1940–2012

The Contribution of Drug Overdose to Educational Gradients in Life Expectancy in the United States, 1992–2011

Back to School: Racial and Gender Differences in Adults’ Participation in Formal Schooling, 1978–2013