Create an alert for Zeitschrift für Außen- und Sicherheitspolitik now and receive an email for each new issue with an overview and direct links to all articles.

The concept of smart power, which Joseph S. Nye defined as a combination of soft and hard power, was embraced by the Obama administration and became an integral part of its foreign policy strategy. With the administration of Donald Trump, we are witnessing a shift away from soft power toward hard power, which indicates a departure from the smart power strategy of his predecessor. This essay raises the issue of the recent decrease of American soft power and concludes that there is a correlation between this decline and the retreat of the U.S. from its global leadership role. 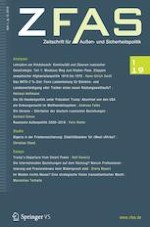