Create an alert for Experiments in Fluids now and receive an email for each new issue with an overview and direct links to all articles.

The study of flow and heat transfer through a bundle of rods is important, as this type of configuration is widely used in many engineering applications, for example, in heat exchangers, clusters of support structures, steam generators, and nuclear power reactors. This work experimentally investigated the flow-field characteristics of rod bundles with helically wrapped wires (wire-wrapped rod assemblies) proposed for advanced burner reactors. Subchannel blockage is one of the most interesting accident scenarios for liquid metal fast reactors as different mechanisms can lead to a partial or total subchannel blockage. It is of paramount important to understand the thermal-hydraulic behavior of the flow in the vicinity of such blockages. The flow mixing characteristics in two interior subchannels located near the core of the bundle, one without and one with the presence of a blockage, were experimentally investigated. The velocity fields within the spatial gaps of two subchannels were obtained by applying the matched-index-of-refraction and time-resolved particle image velocimetry (TR-PIV) technique for Reynolds numbers of 4000 and 17,000. The first- and second-order statistics, including the mean velocity, root-mean-square fluctuating velocity, and Reynolds stress, were computed from the obtained TR-PIV velocity vector fields. In the blocked sub-channel, the TR-PIV results revealed a large recirculation flow region in the vicinity of the blockage that was created by the interaction between inflows from neighboring subchannels. Spectral analysis was performed and the vortex shedding frequency indicated by the Strouhal number was found to be \(St=0.16\) for the two Reynolds numbers investigated. The flow characteristics of the interior subchannels were investigated via the two-point cross-correlation of fluctuating velocities. In addition, proper orthogonal decomposition (POD) analysis was applied to the instantaneous vorticity fields to extract the statistically dominant flow structures. Finally, the statistical characteristics of the vortex, such as the vortex populations, spatial distributions, and vortex strengths, were acquired by combining POD analysis and the vortex identification algorithm. 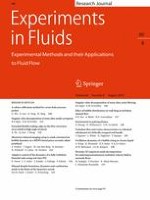 Oscillation dynamics of a bubble rising in viscous liquid