Create an alert for Social Indicators Research now and receive an email for each new issue with an overview and direct links to all articles.

This study aimed to find out how heterogeneous temporary employment is reflected in later labour market attachment. Using data from Finnish Quality of Work Life Surveys in 1990, 1997 and 2003 merged with an 8-year register follow-up, we compared permanent workers with three categories of temporary employees: substitutes, common fixed-term (e.g. project workers), and periphery (seasonal, on-call, temporary agency and employment subsidy) workers. First, we applied sequence analysis to identify the main activities at the end of each follow-up year for all employees with permanent and temporary contracts. On this basis, we formed six typical employment sequence clusters. Second, we performed multinomial logistic regression to find out whether there are statistically significant differences between temporary and permanent employees in terms of how they are divided between the sequence clusters. Four in five permanent employees were in stable employment over the following 8 years, compared to only two in five temporary periphery workers. The corresponding proportion for substitute workers was 70% and for common fixed-term workers 64%. Compared to permanent workers, those in common fixed-term or periphery temporary employment were more likely to become unemployed, whereas substitute workers were not. Our major finding is that periphery employment clearly increases the risk of being edged out of the labour market through retirement, especially on disability pension.
Advertisement

previous article Overeducation of Young Workers in Spain: How Much Does the First Job Matter? Social Indicators Research
next article From the Replacement Rate to the Synthetic Indicator: A Global and Gender Measure of Pension Adequacy in the European Union 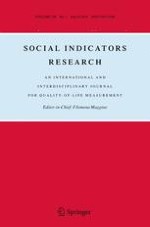 Parenthood and Quality of Life in Old Age: The Role of Individual Resources, the Welfare State and the Economy

Multidimensional Poverty in Mountainous Regions: Shan and Chin in Myanmar

Overeducation of Young Workers in Spain: How Much Does the First Job Matter? Social Indicators Research

Erratum to: The Rising Burden of Healthcare Expenditure in India: A Poverty Nexus

Combining Achievement and Well-Being in the Assessment of Education Systems