The online version of this article (https://​doi.​org/​10.​1007/​s12599-020-00638-z) contains supplementary material, which is available to authorized users.
Accepted after one revision by Natalia Kliewer.

Package bids, i.e., bids on sets of items, are an essential aspect of combinatorial auctions. They can allow bidders to accurately express their preferences. However, bidders on packages consisting of few items are often unable to outbid provisionally winning bids on large packages. To resolve this, both coordination as well as cooperation are needed. Coordination, since smaller bidders need to bid on packages that are disjoint; cooperation, since typically bid increases from more than one bidder are required to overcome the threshold to outbid a larger package bid. The authors design an information system that supports the implementation of an iterative combinatorial auction; this system is specifically aimed at helping bidders overcome coordination and threshold problems. They study the effect of information feedback on the behavior of bidders in different auction settings. The authors test this in an experimental setting using human bidders, varying feedback from very basic information about provisionally winning bids/prices, to providing more advanced concepts such as winning and deadness levels, and coalitional feedback. The experiment indicates that coalitional feedback has a positive impact on economic efficiency in cases where difficult threshold problems arise; however, it appears to have an adverse effect when threshold problems are easy. 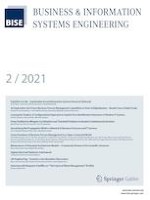 Seven Paradoxes of Business Process Management in a Hyper-Connected World

Leaving the Shadow: A Configurational Approach to Explain Post-identification Outcomes of Shadow IT Systems