"We don't have time to disregard any option for climate protection" | springerprofessional.de Skip to main content
SEARCH MENU 1 2 3 4

Create an alert for MTZ worldwide now and receive an email for each new issue with an overview and direct links to all articles.

If we are to achieve our climate targets, governments need to impose stringent, forward-looking regulations. In the interview Dr. Uwe Lahl, Director-General at the Baden-Württemberg Ministry of Transport, highlights possible solutions and explains why a technology-neutral approach is absolutely essential.
×
…
Advertisement
previous article Single-cylinder CV Engine for Friction Measurement in Fired Operation
next article Low-friction Sealing System for E-drives 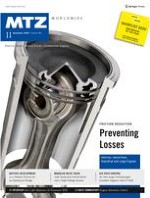