Many important processes—from the manufacturing of integrated circuit boards to an insect’s ability to walk on water—depend on the wetting of liquids on surfaces. Wetting is commonly controlled through material selection, coatings, and/or surface texture. However, wetting is sensitive to environmental conditions. In particular, some hydrophobic fluoropolymer coatings are sensitive to extended water exposure as evidenced by a declining contact angle and increasing contact angle hysteresis. Understanding “degradation” of these coatings is critical to applications that deploy them. The durability of a series of fluoropolymer coatings was tested by measuring the water contact angle before, during, and after extended submersion of coated glass slides in a deionized water bath. Vibration was introduced as a potential method for expediting the effects of long-term water exposure, so similar measurements were taken before, during, and after the same coatings were subject to ultrasonic vibration while covered in deionized water. Both methods caused changes in advancing and receding contact angles, but degradation rates of vibrated coatings were significantly increased. Prolonged soaking caused significant decreases in the contact angle of most of the samples, though most experienced significant recovery of hydrophobicity when heat-treated at 160°C after submersion. Some coatings appeared noticeably more resistant to degradation by one or both methods. FluoroSyl showed no clear change under submersion, while other coatings experienced significant contact angle change. Degradation of vibrated coatings was also inconsistent among coatings and was not simply an acceleration of the degradation resulting from submerging coatings in water. This was apparent as some coatings were affected by one method but not the other. Atomic force microscopy was utilized to characterize the surface roughness of the coatings and revealed differing surface effects for different coatings after submersion and heat treatment. However, the magnitude of this roughness change was insufficient to fully explain the wetting changes. The rate of contact angle degradation was not altered significantly for coatings that were vibrated with acceleration magnitudes between 700 and 7000 g.
Advertisement
previous article Tunable surface chemistry and wettability of octafluorocyclobutane and acrylic acid copolymer combined LDPE substrate by pulsed plasma polymerization
next article Controlled surface modification of poly(methyl methacrylate) film by fluoroalkyl end-capped vinyltrimethoxysilane oligomeric silica/hexagonal boron nitride nanocomposites 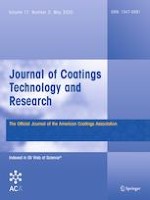 Superhydrophobic surface modification for corrosion protection of metals and alloys