Create an alert for Biodiversity and Conservation now and receive an email for each new issue with an overview and direct links to all articles.

» Get access to the full-text
Important notes
Communicated by Adeline Loyau.

Islands host high numbers of endemic species, and the latter are especially exposed to human-driven habitat alteration because their population size is constrained by the limited space and resources found in insular systems. Extreme events linked with climate change and direct anthropogenic stressors may synergistically affect endemic species, and even push them to the brink of extinction. Bats include many insular endemics whose life traits make them excellent candidates to test the effects of both climate-change driven events and direct human disturbance. The Mediterranean island of Sardinia is home to the endemic long-eared bat Plecotus sardus. Within the island, this recently described species is restricted to a limited range where suitable habitat is present. This makes the species extremely vulnerable to human action. Here we use Plecotus sardus as a model to assess the response of insular endemic bats to climate change and human disturbance, exploring demographic trends across two decades. Overall, roost count data for all known reproductive sites showed a steep (-63.4% between 2003 and 2020) population decline, so that the current estimated population size is only 36.5% of that observed in 2003. Colony growth rates are strongly affected by recurring wildfires around reproductive sites, summer precipitation and temperature extremes, pointing to climate change as a primary threat to the species along with direct human interference. Such anthropogenic pressures may therefore rapidly expose island endemic bats to a high extinction risk. Based on our analysis, Plecotus sardus is among the most threatened mammals, and likely the rarest bat species, in Europe. Thus, we urge that (1) similar assessments are conducted on other insular endemic bats in Mediterranean Europe, (2) IUCN Redlist categories are revised according to new analyses, and (3) recovery action plans are immediately developed and implemented to revert the current population trends. 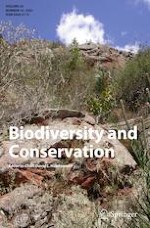 Assessment of the conservation status of marine species of the Habitats Directive (92/43/EEC) in Italy: results, drawbacks and perspectives of the fourth national report (2013–2018)