With more than 300 million cards sold, HID iClass is one of the most popular contactless smart cards on the market. It is widely used for access control, secure login and payment systems. The card uses 64-bit keys to provide authenticity and integrity. The cipher and key diversification algorithms used in iClass are proprietary, and little information about them is publicly available. In this paper, we have reverse engineered all security mechanisms in the card including cipher, authentication protocol and also key diversification algorithms, which we publish in full detail. Furthermore, we have found six critical weaknesses that we exploit in two attacks, one against iClass Standard and one against iClass Elite (a.k.a., iClass High Security). In order to recover a secret card key, the first attack requires one authentication attempt with a legitimate reader and \(2^{22}\) queries to a card. This attack has a computational complexity of \(2^{40}\) MAC computations. The whole attack can be executed within a day on ordinary hardware. Remarkably, the second attack which is against iClass Elite is significantly faster. It directly recovers the system-wide master key from only 15 authentication attempts with a legitimate reader. The computational complexity of this attack is lower than \(2^{25}\) MAC computations, which means that it can be fully executed within 5 seconds on an ordinary laptop. 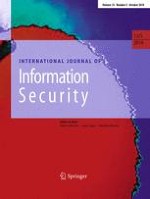 A defense framework against malware and vulnerability exploits

AAnA: Anonymous authentication and authorization based on short traceable signatures