It is well known that the hiring rate of black head coaches in major college football is not representative of the number of student-athletes that are black. However, less obvious is the fact that black head coaches may be treated unfairly when decision-makers decide whether to retain or fire their institution’s current head coach. In this paper, I use a rich dataset of National Collegiate Athletic Associate football coaches from 1990 to 2012, containing measures of coaching performance and school expectations, as well as information on each coach’s race and whether he was fired or retained in each season. Using this data, I estimate a discrete-time hazard model of the probability that a head coach is fired, allowing the hazard rate of black head coaches and white head coaches to differ, and find that black head coaches are 5.28 percentage points more likely to be fired than their white counterparts. Additionally, I find that black head coaches are more likely to be fired in the initial 3 years of tenure, and again in their seventh and eighth years, but that the difference in the probability of release between black and white head coaches in the fourth through sixth years of tenure is small and statistically insignificant.

Title
You’re Fired!: The Impact of Race on the Firing of Black Head Coaches in Major College Football
Author:
Nolan A. Kopkin 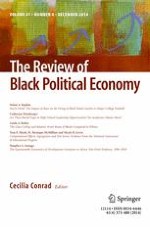 The Questionable Economics of Development Assistance in Africa: Hot-Fresh Evidence, 1996–2010

Are There Racial Gaps in High School Leadership Opportunities? Do Academics Matter More?