Create an alert for Journal of Materials Science: Materials in Electronics now and receive an email for each new issue with an overview and direct links to all articles.

In this paper, the great sensitivity and selectivity to NO2 detection at low temperature down to ppb level of zinc oxide (ZnO) thick-film sensors are reported. Sensor performances of ZnO films prepared by screen-printing technique were evaluated comparing two different ZnO nano-powders in wurtzite crystal structure. Powders were synthesized by hydrothermal route (HT-ZnO) and by auto-combustion sol–gel synthesis (AC-ZnO). After proper characterization of the nano-powders, the thick-film sensors were fabricated by screen-printing technique onto α-alumina substrates equipped with Pt interdigitated electrodes, followed by a thermal treatment. The sensor response was studied in the range 50–250 °C. Best results were reached at 150 °C, with sensor response R (Zg/Z0)—defined as the ratio between impedance under NO2 (Zg) and impedance under dry air (Z0)—equal to 42.92 for HT-ZnO and to 23.18 for AC-ZnO under 0.5 ppm of NO2 in dry conditions. Finally, response and recovery time were measured, and selectivity of the sensors was determined by exposing the film toward O3, CO2, CH4, N2O and humidity at the best working temperature. Both sensors showed great sensitivity for NO2 detection, supporting the exploitation of these sensors as NO2 detectors at ppb level.
Advertisement
previous article Lead carbonate hydroxide nanostructures: a new hydrothermal synthesis in the presence of ethylenediamine and hydrazine and investigation photocatalytic behavior
next article Ultra-low remanence and weak magnetic agglomeration of superparamagnetic magnetite nanoparticles caused by high magnetic moment Tb3+ doping 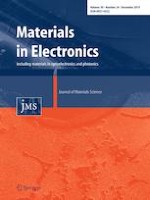 Effect of the Eu3+ (x = 0, 1, 2 and 3 mol%) doped Zn2−xTiO4 and Zn2Ti1−xO4 obtained by complex polymerization method: photoluminescent and photocatalytic properties