Whitebacked planthopper (WBPH; Sogatella furcifera) has become a major threat to rice plants throughout Asia in recent years. In the study reported here, we attempted to biologically control WBPH by using endophytic bacterium strain WH2, which was isolated from rice seedlings and characterized as Bacillus subtilis based on its morphological, physiological, and biochemical characteristics and 16s rRNA gene sequence. Strain WH2 was genetically engineered to express anti-pest Pinellia ternata agglutinin (PTA). The PTA gene (pta) was cloned into plasmid pP43NMK and transformed to strain WH2 for expression, following which one positive transformant was selected by antibiotic resistance and PCR. This strain was denoted WH2::pta. Sodium dodecyl sulfate-polyacrylamide gel electrophoresis and western blot analysis demonstrated that recombinant PTA protein was successfully expressed by recombinant strain WH2::pta. After inoculation, the recombinant WH2::pta was able to colonize rice plants and express secreted PTA protein. The results of the anti-planthopper activity assay showed that WH2::pta significantly decreased the survival and fecundity of WBPH fed on rice seedlings inoculated with WH2::pta (p < 0.001). On day 19 post-inoculation, the number of insects on individual rice plants in the control group was 104.7-fold higher than that on plants inoculated with recombinant WH2::pta and 58.2-fold higher than that on plants inoculated with wild-type WH2. By the end of the study period, all rice seedlings in the control group had died, but those inoculated with recombinant or wild-type WH2 were growing well. These results show that recombinant endophytic B. subtilis WH2 expressing PTA protein can endow its host rice plants with resistance against WBPH. This study presents an approach that may be applied in the future for biologically controlling planthopper using recombinant endophytes. 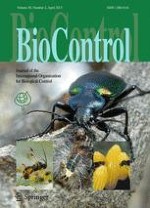