In this paper we discuss how we improved the MChannel group communication middleware for Mobile Ad-hoc Networks (MANETs) in order to let it become both delay- and energy-aware. MChannel makes use of the Optimized Link State Routing (OLSR) protocol, which is natively based on a simple hop-count metric for the route selection process. Based on such metric, OLSR exploits Dijkstra’s algorithm to find optimal paths across the network. We added a new module to MChannel, enabling unicast routing based on two alternative metrics, namely end-to-end delay and overall network lifetime. With such new module, we prove that network lifetime and average end-to-end delay improve, compared to the original OLSR protocol implementation included in the mentioned middleware. Thanks to MChannel’s approach, which implements routing in the user’s space, the improvements achieved in the unicast jOLSR routing protocol are transparently applied to the upstanding MChannel overlay multicast OMOLSR protocol. We also discuss how the proposed new module actually represents a general framework which can be used by programmers to introduce in MChannel novel metrics and path selection algorithms. 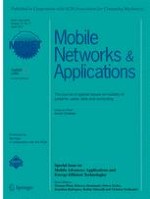