Dissemination is a service provided for Wireless Sensor Networks to update the deployed sensor nodes online by using over air programming through radio communication. Since the centralized data dissemination approaches suffer from the limitations of single point of failure, lack of scalability and inability to provide better security they have been replaced by the distributed approaches. In distributed data dissemination, the dissemination privileges are delegated by the network owners to the network users to disseminate the data items on their behalf. In the distributed data dissemination, security is a major concern. The adversaries can easily exploit the security vulnerabilities and launch various security attacks that can disrupt data dissemination process. In this paper we propose the novel Secured-Selective Design Relay Inquiry Protocol (S-SELDRIP) which provides the secured optimal routing by means of hop by hop authentication during data dissemination. The feasibility and efficiency of S-SELDRIP scheme have been analyzed by considering possible vulnerabilities during the data dissemination and the extent to which the proposed scheme is able to withstand them. The proposed protocol is tested in NS2 Mannasim framework and results have taken by measuring the various parameters through repeated simulations. Simulation results justify the viability of the proposed scheme. 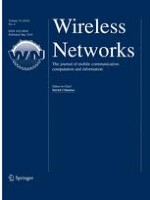 A performance study for the multicast collision prevention mechanism for IEEE 802.11