A new sintering technique for enhancing a densification and hardness of sintered titanium body by supplying hydrogen was developed (Hydrogen Sintering Process, HSP). The HSP was developed by only injecting hydrogen into an argon atmosphere during the core time. As a result, sound titanium sintered bodies with high density and hardness were obtained by the HSP. In addition, a pore size and number of the HSP specimens were smaller than those of the argon atmosphere specimen. It was found that the injecting hydrogen into the argon atmosphere by HSP can prevent the formation of oxide layers, resulting in enhanced densification and hardness. 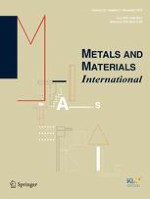 Solubility of TiO2 in NaF-CaF2-BaF2 Melts