Bi1.6Pb0.4Ba2Co2Oy/3 wt% Ag composites have been textured using the laser floating zone technique. Microstructural observations have shown the formation of relatively high amounts of secondary phases and cracks along the plate-like grains in the as-grown materials. In spite of these microstructural features, electrical properties have not been drastically decreased. Annealing of these as-grown rods has enhanced the grains connectivity, decreased the contents of the secondary phases, and healed the cracks, thereby increasing their electrical performances. It has been deduced that oxygen content in the thermoelectric phase has not been significantly modified through annealing, as demonstrated by the very similar Seebeck values at room temperature in the as-grown and annealed samples. As a consequence of the low electrical resistivity values in the annealed materials, they reached higher power factor values than the as-grown ones. The highest power factor at room temperature is in the range of those reported for single crystals, while at 650 °C, it is the highest reported in Bi–Ba–Co–O polycrystalline family so far. 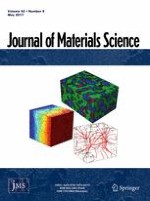 Fluoride etching of mordenite and its influence on catalytic activity