An effective sorbent to remove the perfluorooctane sulfonate (PFOS) and hexavalent chromium (Cr(VI)) simultaneously from simulating plating wastewater was prepared in this study. The removal of Cr was pH-dependent. However, PFOS removal on organo-montmorillonites (Mts) was not sensitive to pH changes. The presence of micelles and hemi-micelles resulted in an enhanced PFOS sorption capacity which reached 1,000 mg/g on the hexadecyltrimethylammonium bromide (HDTMAB) modified montmorillonite. The cationic surfactants on organo-Mts were largely responsible to the hydrophobic partition. For Cr(VI), the stable coordination compounds between amido, sulfhydryl groups and HCrO4 − were beneficial to its sorption on AET–Mt and AET–HDTMAB–Mt (AET, 2-aminoethanethiol hydrochloride). The result indicated that the AET–HDTMAB–Mt was highly effective for removing both PFOS and Cr(VI) simultaneously, and their sorption capacities reached 890 and 14 mg/g respectively. 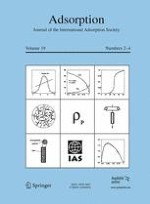