The through glass via (TGV) substrate plays an important role in wafer-level vacuum packaging of micro-electro-mechanical system (MEMS) devices. The airtightness of TGV is critical for it but difficult to achieve. Therefore, the solid–liquid interface energy was considered to enhance airtightness. Theoretical analysis revealed that the solid–liquid interface energy between the melted glass and SiO2 was higher than that between the melted glass and Si. Experiments were designed and conducted to verify the finding. The driving-mode quality factor of gyroscopes sealed by TGV with a layer of SiO2 was measured to be 9119 while the driving-mode quality factor was only 130 without a layer of SiO2, with the latter value nearly equivalent to that in the atmosphere. According to the calibration of vacuum degree, the driving-mode quality factor (9119) indicated that the internal air pressure was about 100 Pa, which shows the feasibility of TGV with a layer of SiO2 for wafer-level vacuum packaging. 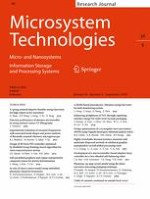