Clothes are often discarded when much of their potential lifetime is left. Many charitable organizations therefore collect used clothing and resell it as second-hand clothes for example in Eastern Europe or Africa. In this connection, the question arises whether reusing clothes actually results in a decrease of the environmental burden of the life cycle of clothing. The environmental burden of clothing has been studied in several studies. However, most of these studies focus solely on the energy consumption aspects and pay little attention to the potential benefits of diverting used clothing from the waste stream. The aim of the study was to assess the net environmental benefits brought by the disposal of used clothing through charities who return them for second-hand sales assuming that second-hand clothes to some extent replace the purchase of new clothes.

The extent to which second-hand clothes (SHC) introduces such a replacement was investigated applying a methodology in which a questionnaire-based survey was conducted on more than 200 consumers in second-hand shops. The survey was done in Sweden and Estonia, and Africa was included by estimation. Based on the identification of the different profiles of the consumers questioned, a methodology was developed to get a quantitative evaluation of the replacement of new clothes enabled by second-hand clothing consumption. A life cycle assessment was conducted based on the EDIP methodology. The life cycle impacts of clothes that are directly disposed of by incineration were compared with the life cycle impacts of clothes that are collected and sorted after consumer use in order to be reused. Two products were assessed: a cotton T-shirt and a pair of polyester (65%)/cotton (35%) trousers. The functional unit was 100 garments in the use stage.

Based on the survey result and the methodology applied, the purchase of 100 second-hand garments would save between 60 and 85 new garments dependent of the place of reuse. Based on information about the second-hand clothing activities conducted by Humana People to People in Sweden and Estonia, it was assumed that over 100 collected items 60 would be reused, 30 recycled in other ways, and ten go to final disposal. Using these inputs, the LCA showed that the collection, processing, and transport of second-hand clothing has insignificant impacts on the environment in comparison to the savings that are achieved by replacing virgin clothing. The reduction of impacts resulting from collecting 100 garments for reuse range from 14% decrease of global warming for the cotton T-shirt to 45% reduction of human toxicity for the polyester/cotton trousers.

The approach applied is a fair way of establishing the net benefits from introducing clothes reuse. Indeed, it enables to take into consideration all the activities connected to reusing clothes, including, for instance, recycling and disposal of the collected clothes not suitable for reuse. In addition, the routes followed by the collected clothes have been determined based on real figures. A main assumption concerns the estimation of avoided production of new clothes brought by clothes reuse. The method used, based on questionnaires, could be further developed but still suggests an approach on an issue that had not been investigated so far.

The results of the study show that clothes reuse can significantly contribute to reducing the environmental burden of clothing.

It would be beneficial to apply other methods for estimating the avoided production of new clothes in order to check the validity and reliability of the results obtained in the current study. Such further work could include the possible difference in the lifetime of second-hand clothes compared to new clothes. 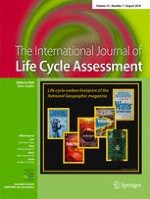 Coupling GIS and LCA for biodiversity assessments of land use

Including CO2-emission equivalence of changes in land surface albedo in life cycle assessment. Methodology and case study on greenhouse agriculture