Thermal springs are attractive geological features interesting for tourists because of their balneological and therapeutic applications. In Iran, the thermal springs surrounding Mount Sabalan are famous and unique in this regard. Two clusters of thermal springs consisting of 16 springs and mostly used as spas occur in Neer and Meshkinshahr areas. In order to investigate the seasonal changes of field and chemical parameters and to trace element concentrations in dry and wet seasons, springs were sampled twice in May and November. Field data including T, EC, pH and Q were measured on-site and major cations and anions were analysed in the laboratory along with 72 trace elements. Cations show the following order of abundance: Na ≫ Ca ≥ K > Mg and anions follow the order of Cl > HCO3 > SO4. Trace element concentrations indicate that most of the elements show concentrations well beyond the standard guideline values for drinking water. pH, T, spring discharge and elevation are not correlated with each other and with other parameters, indicating that they have had no role on concentrating or depleting trace elements in spring waters. While the two sets of samples were taken within a 6 month interval, the elements and parameters show slight or no variation from the first period to the second and in some cases, they show less than 5 % decrease or increase in the second sampling period. Correlation coefficient and principal component analysis of analytical data indicate that EC, K, Cl, HCO3, As, B, Ba, Br, Li, Na, Rb, Sr and V show very strong mutual correlation coefficients implying their relationship and common source and fate in the hydrothermal fluid that carries them out of the geothermal system. Moreover, they all fall in the component 1 of PCA. This group of elements is supposed to be derived from the magmatic-hydrothermal system through the interaction of hydrothermal fluids with the rocks they have passed through. The mean As value is 160-fold higher than the guideline values (10 μg/l) and Mn and Sb shows an exceedance of 12- and 11.5-fold, respectively. Arsenic shows a variation of 5–5,834 μg/l. Hence, it is supposed that potentially toxic elements may have adverse effects on tourists using the springs as a treatment or recreation. Indeed, the discharge of springs with high values of As and other elements represents a threat for downstream water uses. The higher concentrations of most elements including As, Pb, S, Cl and Sb and the higher pH values found in Neer area springs seem to be more related to an older hydrothermal system present in this area than the Meshkinshahr system that is still active today. 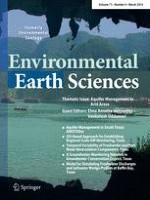 Characterization of acid mine drainage sources in the Iberian Pyrite Belt: base methodology for quantifying affected areas and for environmental management

An appraisal of groundwater quality in Seymour and Blaine aquifers in a major agro-ecological region in Texas, USA