Coffee is a ubiquitous beverage in the USA today, accounting for 19% of the world’s coffee consumption. Although coffee consumption in itself is not new, the technology for brewing coffee and its corresponding environmental impact has been evolving rapidly in recent years, particularly with the widespread adoption of the single-serve coffee pod. This work utilizes a midpoint life cycle assessment with multiple environmental impact categories, to assess the environmental impact of a conventional (drip filter) brewing system, compared to a novel (single-serve coffee pod) brewing system, from cradle to grave.

This work analyzes the impact of consumer habits (such as leaving the novel system in standby mode) and phantom electricity consumption on the environmental impact of the system, in addition to the brewing systems themselves. The TRACI (Tool for Reduction and Assessment of Chemical and Other Environmental Impacts) suite is utilized to define the impact categories for the analysis, providing a holistic view. The SimaPro software tool is utilized along with multiple databases to enable the analysis.

A major conclusion of this work is that although the technology utilized to brew the coffee is relevant to the environmental impact, the human usage of the technology is also equally relevant, although it is not often the focus of literature in this area. In order to truly understand and quantify the environmental impact of brewing coffee across multiple technologies, more information about coffee consumption habits is needed. 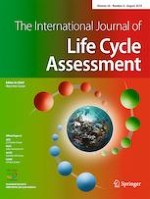 The integration of long-term marginal electricity supply mixes in the ecoinvent consequential database version 3.4 and examination of modeling choices

WATER USE IN LCA