Groundwater recharge is affected by land use in (semi)arid areas. A new application of the chloride-mass-balance approach has been developed to estimate the reduction in groundwater recharge following land-use change by comparing chloride concentrations below the root zone and above the base of the chloride accumulation zone, before and after the land-use conversion. Two sites in the Loess Plateau of central China have been selected for study. Results from the Guyuan terrace region show that groundwater recharge beneath natural sparse small-grass was 100 mm/year, but the conversion to winter wheat about 100 years ago has reduced groundwater recharge to 55 mm/year. At the Xifeng Loess Plain the conversion from winter wheat, with groundwater recharge at 33 mm/year, to apple orchard 7 years ago has led to chloride accumulation to 5 m below land surface, suggesting the recharge rate has been reduced. This is in agreement with previous studies in these areas which have shown that the regional afforestation and other land-use conversions have resulted in deep soil desiccation and have caused an upper boundary to form with low matrix potential, thus preventing the soil moisture from actually recharging the aquifer. 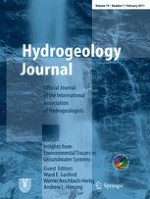