The efficacy of public policies to reduce poverty became questionable following the HNLSS 2010 report because per capita income growth rate rose from 3.3 % in 2004 to 4.9 % in 2010 suggesting that the economy grew by 1.04 % per year between 2004 and 2010; and yet both poverty and inequality increased. Poverty increased from 54.4 % in 2004 to 69 % in 2010 suggesting that poverty grew by 1.07 % per year between 2004 and 2010. Inequality rose from 0.4296 in 2004 to 0.442 in 2010 suggesting that inequality rose by 1.19 % per year between 2004 and 2010. The rise in growth was not accompanied by reduction in both poverty and inequality. The study was motivated by the quest to predict where distributional changes will have the largest impact on poverty reduction as well as to assess the relative effectiveness of Araar’s (Expected poverty changes with economic growth and redistribution, 2012) four competing approaches to semi-elasticity estimation. Previous studies neither estimated the absolute level of changes in Foster–Greer–Thorbecke (FGT) poverty measures nor the associated poverty semi-elasticity of distributional changes, thus did not consider simulated non-marginal distributive changes due to initial level of poverty. The objectives of study are first, to investigate the inequality semi-elasticity of poverty reduction in Nigeria using four competing approaches by Araar (2012); and second, to predict where distributional changes will have the largest impact on poverty reduction using HNLSS 2010 and NLSS 2004. The study finds that inequality semi-elasticity estimates are sensitive to the choice of FGT poverty measure. In terms of the relative effectiveness of the four competing approaches, the study finds also that the analytical method performs best in the rural area, but poorly in the urban area as inequality rises. It also finds that the numerical approach performs best when the distributive change is on poverty gap and squared poverty gap for both marginal and non-marginal changes. It further finds that the analytical method yields more reliable estimates as the rise in inequality continues at higher percentages say 5 and 10 %. The effect of the rise in inequality on poverty gap suggests that poverty increased faster and higher in the urban area than in the rural area; while for squared poverty gap poverty increased faster in the rural area than in the urban area. This confirms that squared poverty gap measures poverty better than either poverty incidence or poverty gap indicating that it is the most distributive-sensitive poverty measure. It was further observed that the semi-elasticity estimates on poverty gap both for urban and rural areas confirmed the numerical method as producing highest expected poverty rates than the other competing approaches with the counterfactual approach yielding the second highest. 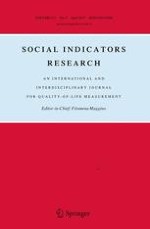 Subjective Well-Being Among HIV-Positive South Africans: The Influence of Resilience and Social Capital

The Economic Payoffs of Trust: An Empirical Investigation from Developing Countries Robust to Jackknife Coefficient Distribution

Utilization of Quality Source of Prenatal-Care in India: An Evidence from IDHS

Where is the Location of “Health” in the Human Values System? Evidence from Estonia