In this paper, we first formulate the dynamics of the fan motor rotation angle \(\theta (t)\) in terms of a second-order Ito-stochastic differential equation (s.d.e). The aim is to estimate \(\theta (t)\) on a real-time basis by taking measurements of the transition probability of a quantum system from one state to another when excited by a quantum image field that passes through the fan stroboscopic window. The quantum image field is modeled as a superposition of creation and annihilation operators modulated by appropriate functions of time, dependent upon the quantum electromagnetic field frequency. This field after stroboscopic windowing excites a 3-D quantum oscillator which causes it to make transitions between two oscillator base states with the Quantum field remaining in a coherent state. The dynamics of the transition probability between two fixed oscillator states is shown to be a component of a \(5\times 1\) vector that satisfies an s.d.e in which the fan window angle and the fan window angular velocity also form some components. Simulation displays the evolution of these transition probabilities as well as of the fan rotation angle. This s.d.e for the \(5\times 1\) vector when coupled to a measurement model for the 5th component, namely the transition probability, is directly substituted into the equations for an extended Kalman filter (E.K.F), thereby obtaining real-time estimates of the fan angle in terms of the accumulated data of oscillator transition probability. 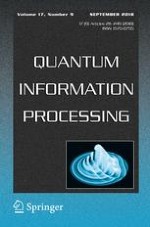