Hydraulic fracturing, or fracking, is a process of introducing liquid at high pressure to create fractures in shale rock formations, thus releasing natural gas. Flowback and produced water from fracking operations is typically stored in temporary open-air earthen impoundments, or frack ponds. Unfortunately, in the United States there is no public record of the location of impoundments, or the dates that impoundments are created or removed. In this study we use a dataset of drilling-related impoundments in Pennsylvania identified through the FrackFinder project led by SkyTruth, an environmental non-profit. For each impoundment location, we compiled all low cloud Landsat imagery from 2000 to 2016 and created a monthly time series for three bands: red, near-infrared (NIR), and the Normalized Difference Vegetation Index (NDVI). We identified the approximate date of creation and removal of impoundments from sudden breaks in the time series. To verify our method, we compared the results to date ranges derived from photointerpretation of all available historical imagery on Google Earth for a subset of impoundments. Based on our analysis, we found that the number of impoundments built annually increased rapidly from 2006 to 2010, and then slowed from 2010 to 2013. Since newer impoundments tend to be larger, however, the total impoundment area has continued to increase. The methods described in this study would be appropriate for finding the creation and removal date of a variety of industrial land use changes at known locations. 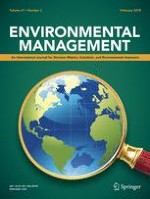 Awareness and Adoption of Soil and Water Conservation Technologies in a Developing Country: A Case of Nabajuzi Watershed in Central Uganda

How Participatory Should Environmental Governance Be? Testing the Applicability of the Vroom-Yetton-Jago Model in Public Environmental Decision-Making

Correction to: Satellite Images Combined with Field Data Reveal Negative Changes in the Distribution of Babassu Palms after Clearing off Amazonian Forests