A model is presented that relates the proportion of bicycle journeys to work for English and Welsh electoral wards to relevant socio-economic, transport and physical variables. A number of previous studies have exploited existing disaggregate data sets. This study uses UK 2001 census data, is based on a logistic regression model and provides complementary evidence based on aggregate data for the determinants of cycle choice. It suggests a saturation level for bicycle use of 43%. Smaller proportions cycle in wards with more females and higher car ownership. The physical condition of the highway, rainfall and temperature each have an effect on the proportion that cycles to work, but the most significant physical variable is hilliness. The proportion of bicycle route that is off-road is shown to be significant, although it displays a low elasticity (+0.049) and this contrasts with more significant changes usually forecast by models constructed from stated preference based data. Forecasting shows the trend in car ownership has a significant effect on cycle use and offsets the positive effect of the provision of off-road routes for cycle traffic but only in districts that are moderately hilly or hilly. The provision of infrastructure alone appears insufficient to engender higher levels of cycling. 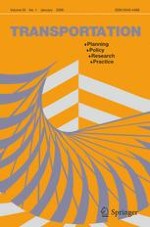 Correlations between industrial demands (direct and total) for communications and transportation in the U.S. economy 1947–1997

The effect of the London congestion charge on road casualties: an intervention analysis

The impact of high-speed technology on railway demand

Children’s mode choice for the school trip: the role of distance and school location in walking to school