Transcranial magnetic stimulation combined with electroencephalography (TMS-EEG) is widely used to study the reactivity and connectivity of brain regions for clinical or research purposes. The electromagnetic pulse of the TMS device generates at the instant of administration an artifact of large amplitude and a duration up to tens of milliseconds that overlaps with brain activity. Methods for TMS artifact correction have been developed to remove the artifact and recover the underlying, immediate response of the cerebral cortex to the magnetic stimulus. In this study, four such algorithms are evaluated. Since there is no ground truth for the masked brain activity, pilot data formed from the superposition of the isolated TMS artifact on EEG brain activity are used to evaluate the performance of the algorithms. Different scenarios of TMS-EEG experiments are considered for the evaluation: TMS at resting state, TMS inducing epileptiform discharges, and TMS administered during epileptiform discharges. We show that a proposed gap filling method is able to reproduce qualitative characteristics and, in many cases, closely resemble the hidden EEG signal. Finally, shortcomings of the TMS correction algorithms as well as the pilot data approach are discussed.
× 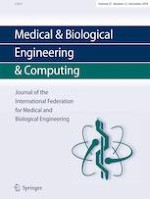