Charcoal rot incited by Macrophomina phaseolina is one of the major diseases of green gram and black gram in Pakistan reducing yields up to 40%. As there are no long-term control strategies for this seed- and soil-borne pathogen, therefore, in the present study, seven indigenous species of Trichoderma were evaluated for their in vitro and in vivo effectiveness against M. phaseolina with the objective to identify alternatives to pernicious fungicides. All seven species of Trichoderma significantly retarded the growth of M. phaseolina in vitro. Maximum reduction (79.63%) was observed with T. harzianum followed by T. hamatum (76.3%) while T. pseudokoningii caused the minimum decrease (58.14%) in growth of the fungus. Similarly, Trichoderma species had significant effects on number and size of sclerotia. M. phaseolina produced the minimum number of sclerotia in the presence of T. hamatum followed by T. harzianum causing reductions of 69.5 and 66.84% over control, respectively. The maximum reduction in size of sclerotia was caused by T. harzianum. The maximum plant survival of green and black gram was obtained with T. harzianum followed by T. hamatum and T. viride. The maximum individual germination of 86.67% was achieved with T. harzianum at a concentration of 2 × 108 (propagules/ml), while the minimum (33.33%) was recorded with T. pseudokoningii at 2 × 104. Trichoderma concentrations also had significant effects on plant survival, being the maximum at the highest concentration. The plant survival decreased as the concentrations of the antagonists decreased showing a direct relationship between plant survival and concentrations. 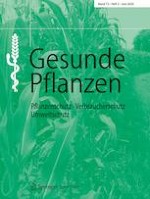 Influence of Anaerobic Digestion Processes on the Germination of Weed Seeds