Particulate matter (PM) mass measurement methodologies were improved considerably with the application of Title 40 Code of Federal Regulations Part 1065 for the 2007 standards for heavy-duty engines that emphasized PM. However, there is still a need to improve the understanding of and the confidence in mass measurements for light-duty vehicles, which are now being subjected to more stringent PM standards. The purpose of this study is to evaluate commercially available partial flow dilutors (PFDs), with a particular focus on their equivalency with the standard constant volume sampler (CVS) tunnel method and the ability to provide reproducible measurements at low PM emission levels. For the main PFD comparison, simultaneous testing was conducted with the three PFDs, over federal test procedure (FTP) and US06 tests. The results of the calibrations and proportionality tests all showed good performance for the PFDs. The exhaust flow meters (EFMs) for the PFDs showed measurements within 2% or less of a calibration source. The PFDs also showed good level proportionality and can easily meet the CFR 1066 requirements for light-duty vehicles and 1065 requirements for all tests performed. Larger differences were seen for the main comparisons between the CVS and the different PFDs during the FTP testing, with the relative difference of PM emissions between the PFDs and the CVS varying from − 16.5 to − 0.6%, with an average pooled difference of − 8.5%. These FTP differences only represented 0.00 to 0.11 mg/mile on an absolute basis, however, and could be attributed to difficulties making and weighing filter mass measurements at such low levels. For the US06 cycle, the differences between the PFDs and the CVS were not statistically significant and ranged from − 6.7 to − 0.7% and up to 0.07 mg/mile. 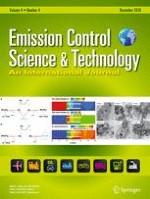 SO2 Oxidation Across Marine V2O5-WO3-TiO2 SCR Catalysts: a Study at Elevated Pressure for Preturbine SCR Configuration