This paper proposes a mechanical measurement technique of the planar elongation viscosity of the low-viscosity liquids. A newly designed flow cell, which consists of a cylindrical cup and a disk-shaped bob with a knife-edged rim, generates the planar elongation flow. Three kinds of Newtonian fluids and an M1 fluid are used. A strain control rheometer pushed the bob into the cup filled with the test fluid and measured the resistant force. The planar elongation viscosity was evaluated using the following two assumptions: first, the resistant force is regarded as the sum of the buoyancy and the resultant forces caused by pressure drops in the planar elongation flow and the shear flow in the test section. Second, the hydraulic mean depth is used as a representative length. The relative errors of the Trouton ratio of the Newtonian fluids were less than 20% compared to the theoretical value of 4.
× 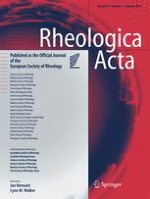 Formulation, characterisation and flexographic printing of novel Boger fluids to assess the effects of ink elasticity on print uniformity