The aquifer of the Chaouia Coast, Morocco constitutes an example of groundwater resources subjected to intensive and uncontrolled withdrawals in a semi-arid region. The analysis of the trends of precipitation and piezometric levels of the Chaouia coastal aquifer, with the use of moving averages, emphasized the impact of the climate on the groundwater resources of the system. The results showed that the periods 1977–1993 and 1996–2000 are characterized by a deficit in precipitation, although the precipitation increased slightly during the periods 1973–1977 and 1993–1996. Numerical modeling of the Chaouia aquifer showed that the groundwater resources of this system are less sensitive to the variations in precipitation. Severe degradation of the resource is related to intensive pumping during the periods of drought, which has forced abandonment of wells due to seawater intrusion. 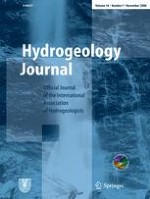