The Soil Conservation Service curve number (SCS-CN) method, also known as the Natural Resources Conservation Service curve number (NRCS-CN) method, is popular for computing the volume of direct surface runoff for a given rainfall event. The performance of the SCS-CN method, based on large rainfall (P) and runoff (Q) datasets of United States watersheds, is evaluated using a large dataset of natural storm events from 27 agricultural plots in India. On the whole, the CN estimates from the National Engineering Handbook (chapter 4) tables do not match those derived from the observed P and Q datasets. As a result, the runoff prediction using former CNs was poor for the data of 22 (out of 24) plots. However, the match was little better for higher CN values, consistent with the general notion that the existing SCS-CN method performs better for high rainfall–runoff (high CN) events. Infiltration capacity (fc) was the main explanatory variable for runoff (or CN) production in study plots as it exhibited the expected inverse relationship between CN and fc. The plot-data optimization yielded initial abstraction coefficient (λ) values from 0 to 0.659 for the ordered dataset and 0 to 0.208 for the natural dataset (with 0 as the most frequent value). Mean and median λ values were, respectively, 0.030 and 0 for the natural rainfall–runoff dataset and 0.108 and 0 for the ordered rainfall–runoff dataset. Runoff estimation was very sensitive to λ and it improved consistently as λ changed from 0.2 to 0.03. 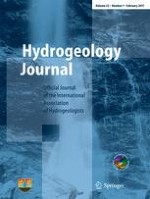 Professor Ramón Llamas: a founding father of hydrogeology in Spain

Development of unconfined conditions in multi-aquifer flow systems: a case study in the Rajshahi Barind, Bangladesh

Estimating groundwater inflow and leakage outflow for an intermontane lake with a structurally complex geology: Georgetown Lake in Montana, USA

Review: Current and emerging methods for catchment-scale modelling of recharge and evapotranspiration from shallow groundwater