Three commonly used thermal equations of state for carbon dioxide, as well as the ideal gas law, have been compared against a large number of measurement data taken from the literature. Complex equations of state reach a higher accuracy than simple ones. The inaccuracy of the density function can cause large errors in fluid property correlations, such as heat capacity or viscosity. The influence of this inaccuracy on the results of numerical simulations have been evaluated by two examples: The first one assumes isothermal gas expansion from a volume, while the second one considers heat transport along a fracture. For both examples, different equations of state have been utilized. The simulations have been performed on the scientific software platform OpenGeoSys. The difference among the particular simulation results is significant. Apparently small errors in the density function can cause considerably different results of otherwise identical simulation setups. 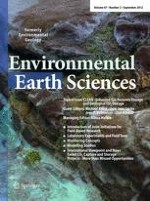 Investigation of the geochemical impact of CO2 on shallow groundwater: design and implementation of a CO2 injection test in Northeast Germany