A least-square solver is presented for groundwater flux estimation using the one-dimensional conduction–advection equation, which was numerically solved using the MacCormack scheme. This approach was utilized to estimate groundwater fluxes from observed borehole temperatures under conditions of surface warming in both rural and urban areas in Leizhou Peninsula, China. The estimated groundwater recharge rate is 0.423 m/year, while the discharge rate is 0.269 m/year. The groundwater recharge rates were obtained in the north part of the study area, and the discharge locations were on Nansan, Donghai and Luzhou Islands, which fit favorably with the regional groundwater flow pattern. Relatively high correlations and low root mean square errors were detected between observed and computed borehole temperature–depth profiles, indicating the estimation is reasonable. The misfit between the observed and computed data might be associated with the uneven distribution of ground surface temperature (GST) and vertical soil heterogeneity. The urban heat island effect contributes an increment of 0.006 °C per year to the GST in the study area, which induces a 0.96 °C higher subsurface temperature in both recharge and discharge areas. The utilization of surface air temperature (SAT) as the upper boundary might underestimate groundwater fluxes, which might lead to inaccurate information for regional groundwater resource management. 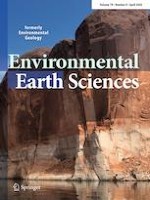 Adsorption of lead and cadmium from aqueous solution by Gunungkidul zeolitic tuff, Indonesia

Natural radionuclides in bottom sediments of the saline lakes. What factors determine their concentration?