This paper analyses the trend and changes in Sri Lanka’s multidimensional poverty before the ethnic war in 2007, the transition through 2009 and after the war in 2012/13. Using multiple correspondence and stochastic dominance analyses, the change in multidimensional poverty for various groups over time is considered using provincial and sectoral decompositions. Evidence shows that multidimensional poverty has declined since 2007. This is seen for war-affected and non-affected provinces as well as all ethnic groups. In particular, the after-war decline was caused by considerable improvements in the rural sector and some improvement in the urban sector but little change in the estate sector. Quantile regression analysis revealed that the war-affected Northern and Eastern provinces, and the ethnic minority of Tamils are still worse off than their counterparts after the war. To reduce multidimensional poverty, a targeted policy of priming up the peace dividend efforts comprising infrastructural development and improving employment opportunities within a coherent policy framework in the war-affected provinces should be undertaken. To address regional imbalance, improving living conditions and incomes in the estate sector in particular cannot be neglected and a public–private partnership could be effective in addressing multidimensional poverty. 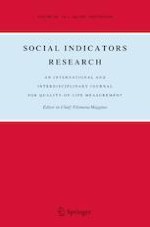 Evaluating the Quality of Urban Development Plans Promoted by the European Union: The URBAN and URBANA Initiatives in Spain (1994–2013)

When Does Economic Freedom Promote Well Being? On the Moderating Role of Long-Term Orientation

The Impact of Neighboring on Changes in Sense of Community Over Time: A Latent Transition Analysis