The literary critic, Edward Said (1935–2003), examined literature in light of social and cultural politics. He analyzed in his words the close connection between history and literature, and exile and history, a subject that occupied much of his life of the mind. Ironically, Said was totally silent about the force, the passion, the drive to write and invest texts with history in his approach to the writings of the German-Jewish philologist and literary critic Erich Auerbach (1892–1957). In discussing his works, Said gives no sense of the historical, ideological and philological context within which the famous philologist wrote his works, while nevertheless acknowledging that Auerbach always referred to the “social environment” of a given writer. My goal is not only to illuminate the suspicious absence of historical and ideological context in Said’s treatment of Auerbach’s works, but also to offer possible answers why he did so. For Said was decisive in creating “narratives of oppression,” and in epitomizing them as well. Thus it seems that his obsession with Western “narratives of oppression” led him to ignore their content and form within the West, when another exiled scholar composed them. 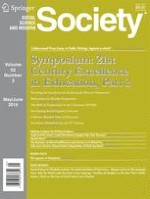 Elizabeth Lunbeck, The Americanization of Narcissism

The Dynamics of Liberal Indifference and Inclusion in a Global Era

The Legacies of Westphalia

The Role of Exploration in the Classroom (STEM)