Coal has many applications for fuel and energy production; therefore, coal mining has always been taken into consideration. When the coal is transported by trucks, it falls on the mine haul road and influence on the geotechnical properties of road pavement. Since, there have been scarce researches on the effects of coal on mine haul road pavement, the aim of this study is to investigate experimentally and numerically the effects of coal on the physical and geotechnical properties of the mine haul road pavement. Therefore, coal was sampled from “Hojedk” coal mine located in Kerman- Iran and was added to the sandy gravel surface layer with weight percentages of 2, 4, 6, and 8%, and its geotechnical properties were examined in compaction, California Bearing Ratio (CBR), unconfined compression strength, direct shear, permeability, sand equivalent, and liquid limit tests. The results indicate that with increase of coal from 0 to 8%, the maximum dry density, CBR, and coefficient of permeability increased to 362, 361, and 132%, respectively, and the sand equivalent decreased by 20%. Also, with increase the percentages of coal from 0 to 4%, unconfined compressive strength and cohesion increased up to 102 and 194%, respectively and with increase the percentages of coal from 4 to 8%, these values decreased by 31 and 43%, respectively. According to scanning electron micrograph test, the sample without coal had more pores than the sample with coal which led to increase the soil permeability and reduction in strength of soil. According to numerical analysis of mine haul road with finite element software OpenSees, it was found that by subjecting the standard wheel load (850 kPa), the least maximum settlement of pavement was observed in the pavement containing 4% coal at 4.4 cm.

Titel
Experimental and Numerical Study of the Effects of Coal on Pavement Performance in Mine Haul Road
Autoren:
Mohammad Saberian
Mohammad Mehdi Khabiri 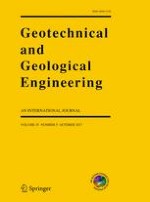 Critical Review of the Hypervib1 Model to Assess Pile Vibro-Drivability