Nuclear magnetic resonance (NMR) has been widely used in the context of quantum information processing (QIP). However, despite the great similarities between NMR and nuclear quadrupole resonance (NQR), no experimental implementation for QIP using NQR has been reported. We describe the implementation of basic quantum gates and their applications on the creation and manipulation of pseudopure states using linearly polarized radiofrequency pulses under static magnetic field perturbation. The NQR quantum operations were implemented using a single-crystal sample of \(\hbox {KClO}_{3}\) and observing \(^{35}\hbox {Cl}\) nuclei, which possess spin 3/2 and give rise to a two-qubit system. The results are very promising and indicate that NQR can be successfully used for performing fundamental experiments in QIP. One advantage of NQR in comparison with NMR is that the main interaction is internal to the sample, which makes the system more compact, lowering its cost and making it easier to be miniaturized to solid-state devices. Furthermore, as an example, the study of squeezed spin states could receive relevant contributions from NQR. 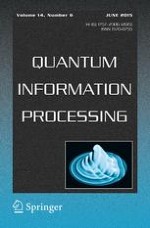